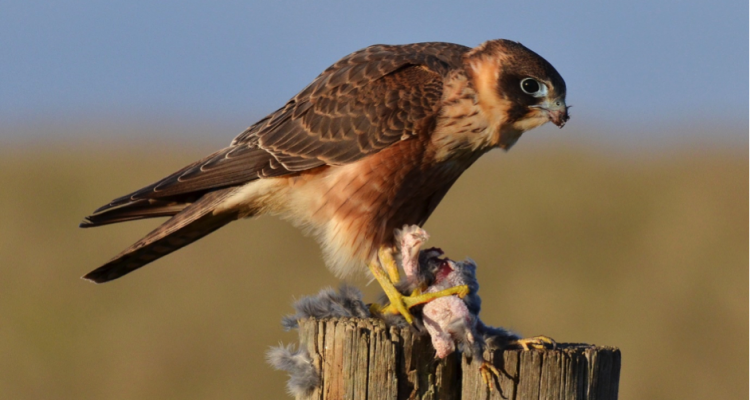 They feed on small birds, bats and flying insects. They are very fast and can often be seen perched at the top of tall trees from which they swoop down onto their prey. Also hunt by high quartering or by low fast flight. Hunting may be done during the day, dawn or dusk and even by night where there is artificial light.

Breeding occurs from August to January with peak laying in September to October. Northerly birds tend to breed earlier than those in the south. Uses or usurps large stock nests of other species (usually Corvus). The clutch varies from 2-4 with an average of 2.75 fledging per nest.

Males and females are alike in appearance but the female is 40-50% larger. A Hobby may be mistaken for a Peregrine Falcon at a distance but the latter is nearly twice the size, has a more sturdy body and a distinctive black ‘helmet’. The cream or buff half-collar of the hobby is diagnostic. The upperparts are slate-grey, varying in darkness. The underparts vary from buff to rufous and are finely dark-streaked. The underwings and tail are uniformly finely barred. The cere varies pale yellowish-grey to pale yellow and the noticeable eye ring is pale-blue. The feet and legs are a dull yellow. Juveniles are darker and browner than adults with rufous feather edges and paler legs and feet. Chicks are cream coloured.

Australian Hobbies may be found throughout South Australia wherever there are trees. They can also be seen in urban areas such as the Adelaide parklands and along the coast. They like Norfolk Island pines and are often seen at the very top. Generally resident but some birds move north in winter.