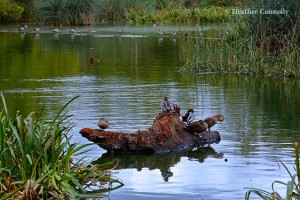 History: In the early 1990s, a natural treatment system was developed by the Council to enhance the existing Community Wastewater Management Scheme (CWMS). The purpose of this natural treatment system was to naturally clean the wastewater to a standard which is high enough for it to be reused. An artificial wetland, made up of three large ponds, was  constructed in 1999.

The ponds are incorporated into an area of approximately 12 hectares, holding on average about 100 megalitres of water at any given time. The ponds effectively form a giant filter that cleans the water as it slowly moves through them.