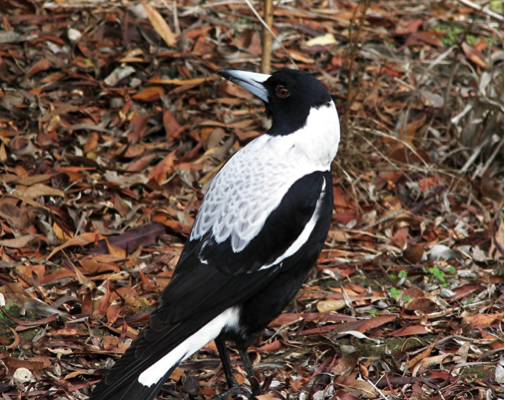 With their striking black-and-white plumage, it is no wonder they are a favourite mascot of numerous footy teams and other organisations.

Their carolling, even late at night, is one of the most Australian of sounds, and they are regarded as one of the best songbirds in the world. Both sexes sing and often do so together (carolling) or by taking turns (duetting). They can have a substantial repertoire which includes mimics of other birds and animals found in their territory. Sometimes they will sing for long periods on their own (called ‘warbling’).

Although obvious all year round, you may well notice magpies most in spring when some of them stridently defend their young and their territories by swooping down on you. This is always a big news item but very few injuries result from magpie swoops. Most of the time the birds are just trying to keep people away from their nests. Avoiding an area where swoops are known to occur a few weeks in the year is the best way to avoid being swooped.

Magpies are generalist feeders taking a wide range of insects as well as small animals, such as lizards. They feed almost exclusively on the ground, using sight to detect prey on the surface and their excellent hearing to locate prey beneath the surface. The stance they take with their head cocked to the side, when listening to precisely locate hidden prey before plunging their beak into the ground, is characteristic.

Magpies form long-lasting pair bonds but there is much extra-pair mating. They are also sedentary and territorial, with the same pair staying in an area for years. Co-operative breeding, with offspring of the previous generation staying on to assist with raising the next brood, has been observed in magpies. The nest is a large cup of twigs placed high in a tree and typically open to the sky.

Magpies are closely related to butcherbirds and woodswallows. They come in numerous sub-species. Broadly there are two forms:- a white-backed form found south and west of Port Augusta and a black-backed form found to the north and east, with a broad area of intermediate forms between these two areas.

With their striking black-and-white plumage, and large pointed bill, and beautiful song, Australian Magpies are arguably one of our most recognisable birds. Their calls

Australian Magpies can be found across all of South Australia.