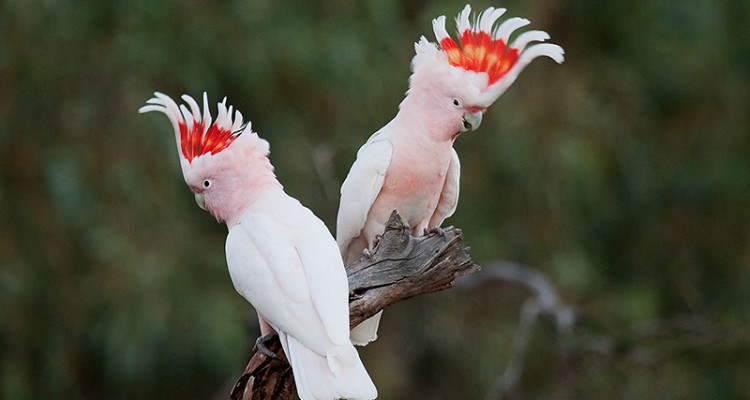 Named after one of Australia’s first explorers of the inland, the Major Mitchell’s Cockatoo is much less raucous than its Sulphur-crested cousin. Its plumage features delicate shades of pink as well as a colourful crest, making this species one of the more attractive cockatoos. It spends much of its day feeding on the ground with other cockatoos (though usually separate from them) or in trees or shrubs.

A denizen of the inland, Major Mitchell’s Cockatoos live in arid and semi-arid regions of Australia, where they generally inhabit wooded habitats. They require trees in their surroundings, because they lay their eggs on a bed of rotting wood at the bottom of a tree hollow, and they also often feed in trees. Like other species of cockatoos (and corellas), Major Mitchell’s Cockatoos often occur in flocks, but unlike the other species, these flocks are seldom large.

In the past it has also been known as the Pink Cockatoo.

A large pink and white cockatoo from 35-40 cm in length. The face, throat, breast, underwings and under tail-coverts are pink with the remainder of the body white. The white crest when erect is banded red, yellow, red. The eye's in the female are red whilst those in the male are black.

South Australia – In the NE; throughout the Murray Mallee (N and S of the River Murray); Northern Eyre Peninsula and Gawler Ranges extending to the Nullarbor Plain and the NW.

Submit a photo to the gallery