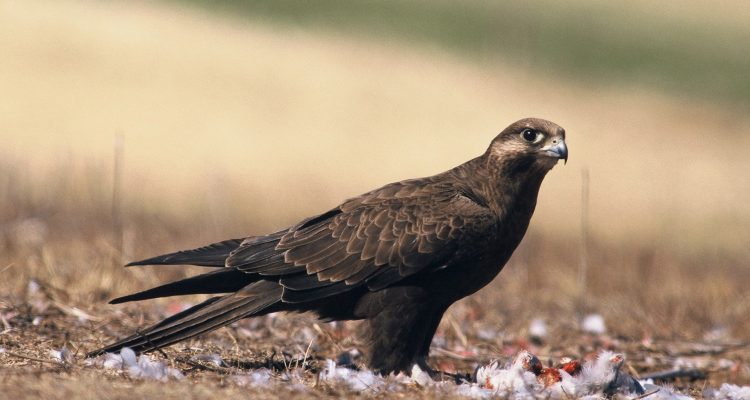 Black Falcons are very dark, nomadic raptors and often associated with the sparsely treed plains of inland Australia, although they also frequent farmland in South Australia. They are usually seen alone, or in pairs.

Black Falcons prey on mammals (rats and rabbits), birds (particularly ground birds such as quail, pipits and larks), large insects, and carrion. They will also take reptiles. They use a variety of hunting techniques: low, fast flight along watercourses or drainage lines, slow quartering, high soaring, or still hunting from a perch.

Prey may be seized in the air or on the ground, by a direct attack, perhaps followed by a chase, or by a stoop. Large prey may be knocked to the ground. Pairs may hunt co-operatively.

Breeding is in the cooler months of the year, usually July to September. They use the stick nests built by other raptors, or those of crows and ravens. The clutch size is usually 3 to 4 with an average of 0.79 young fledging per egg laid.

Black falcons are medium to large falcons similar in size to Peregrines but with broader, longer wings and a longer, square-ended tail. Males and females are alike, with the female being about 40% larger by weight. Overall, they are very dark, ranging from sooty black to dark chocolate -brown. Paler individuals may have a whitish chin, inconspicuous malar stripes and/or paler cheeks and speckles on the beast. The eyes and cere are brown, the eye-ring is a pale blue-grey, and the feet and legs are pale grey to dirty white. The underwings are lighter and in older birds has white spots. Juveniles are darker than adults, without any white marks around the head, but have narrow rufous fringes to the dorsal feathers. The chick has white down.

Black falcons may be encountered anywhere in South Australia except the south-west. They favour sparse woodlands, scrubby grasslands and farmlands in the drier areas and can sometimes be seen following fires, farm machinery, shooters and other raptors in search of flushed prey. Their movements are not well understood. They appear to be partly nomadic following rains and the consequent increase in prey numbers. They may also be partly nomadic, moving north in winter and south in summer.

Black Falcons are monotypic i.e. there are no sub-species.