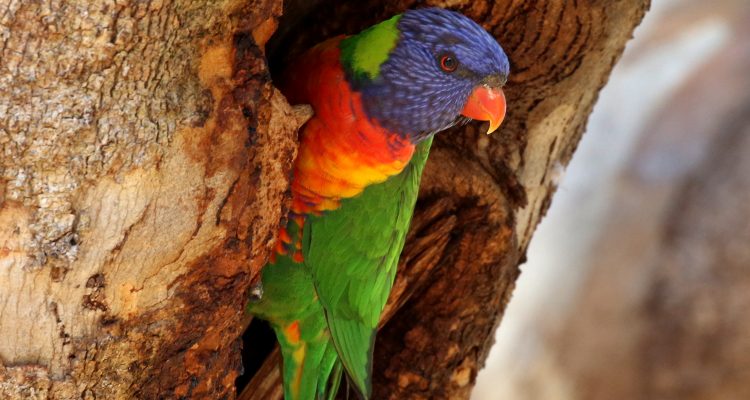 We are fortunate to have one of the most colourful parrots in the world, the Rainbow Lorikeet, living in our suburbs. The largest of the lorikeets, it’s violet-blue head, lime green nape, orange breast and green back, combined with a coral-red beak, are distinctive.

Rainbow Lorikeets give a loud, strident contact call repeatedly in flight. Flocks, in particular, can be very noisy flying overhead, and when settling in to roost.

Rainbow Lorikeets feed mainly on nectar and pollen from trees and shrubs but also take fruits, seeds and insects. In South Australia there are no regular migratory movements but the birds move locally in response to availability of flowering and fruiting plants. Sometimes large feeding flocks congregate around rich food sources

Lorikeets form monogamous pairs, probably for life, and the pair-bond is strengthened with many displays such as mutual preening. Breeding takes place mainly in spring and early summer from August to December, and nests are made in tree hollows.

Rainbow Lorikeet are typical parrot shape, with a stout head and short bill. Their bright colours make them unmistakable. Their raucous calls attract attention as they zoom overhead, and in flight bold red patches stand out under their wings.

Rainbow Lorikeets are found in a variety of wooded habitats in the southern parts of the state – southern Eyre Peninsula, Yorke Peninsula, Kangaroo Island, Mt. Lofty Ranges and the South East. They have adapted well to urban areas and are the most common parrot species in Adelaide suburbs.