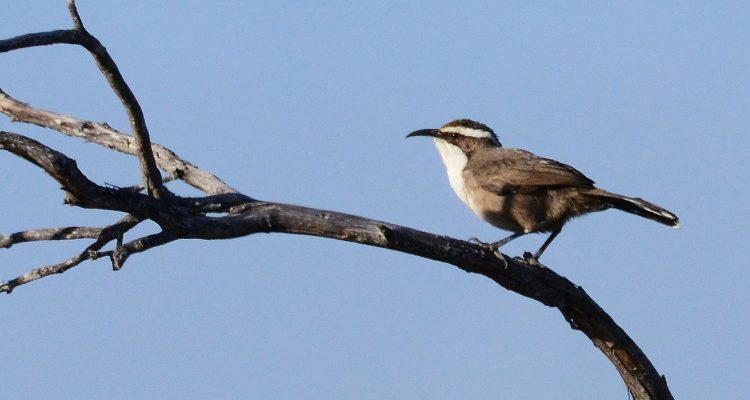 Babblers associate in small groups of 6-13 individuals. Generally, their sentries will find you before you see them and your presence will be announced by their distinctive whistling calls. They are sedentary defending a territory of several hectares year-round.

Babblers are ground foragers living largely on insects and other invertebrates found in leaf litter but will take seeds, fruits and eggs or nestlings of small birds. Breeding occurs mainly in late winter and early spring (Jul-Nov). Babblers are co-operative breeders, usually with one brooding pair, and several helpers.

A small brown babbler with a prominent white eyebrow bordered by thin black lines extending from the beak to the nape. The chin, throat, chest and upper belly are white. The tail and wing feathers are dark brown with the tail grading to blackish-brown, and tipped white except for two central feathers. Other brown areas are grey-brown with the head darker than the rest of the body. The bill is down-curved and pointed. The sexes are alike and juveniles re much like the adult except for a shorter and less decurved bill.

The nominate subspecies of the White-browed Babbler, P. s. superciliosus, is found in the south of South Australia, with subspecies P.s. centralis occurring in the north west with a broad band of P. s. superciliosus x centralis hybrids between them. Babblers favour open forests, woodlands and shrublands with a dense understorey and are often found in mallee (e.g. they can be found in Monarto and Ferries McDonald Conservation Parks). In more settled areas they are often isolated in small protected areas of natural vegetation.