Where is it?: Bucks Lake Game Reserve is located 37 km south west of Mt Gambier adjacent to Carpenter Rocks.

Habitat: The area consists of a low lying wetland with a slight limestone rise on the eastern side of the Reserve. Before the drainage pattern was modified, overflow water from Lake Bonney flowed south east into Bucks Lake, and eventually drained into the sea near Carpenter Rocks. In 1958 the first artificial water outlet for Lake Bonney was constructed. This considerably reduced the amount of water recharging Bucks Lake. The Lake is now a semi-permanent wetland, recharged by run-off water from grazing land to the north east. 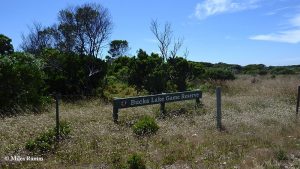