Where is it?: Morialta Conservation Park at Woodforde is adjacent to Black Hill Conservation Park. Montacute Road is the northern boundary and Norton Summit Road part of the southern boundary. Stradbroke Road forms part of the western boundary. Public transport is available on Bus Routes H30 and X30 (Monday to Friday only) to Paradise Interchange (Stops 26 or 27 on Stradbroke Road, Rostrevor). There is car parking at the Morialta Road entrance and near the start of the First Falls trail but other areas of the park can be accessed via Norton Summit Road and Montacute Road. 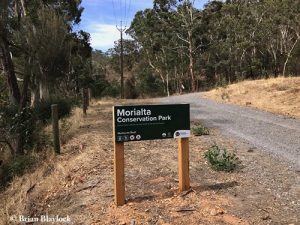 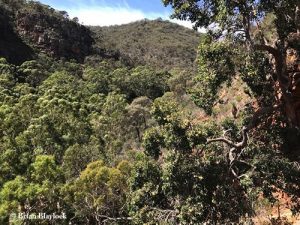 shrubland of heath plants. On the western slopes and extending outside the park boundary the vegetation is dominated by (E. porosa), South Australian Blue Gum (E. leucoxylon) and River Red Gum (E. camaldulensis). There are three seasonal waterfalls along Fourth Creek 1, 2.